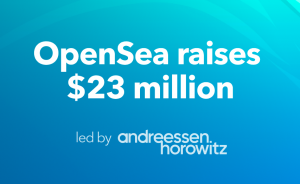 It’s great to see a solid group of subscribers sign up but I’m still figuring out exactly how this is going to work!

I recently wrote my first piece for The Defiant:
A Quick Guide To Accelerators Funding NFT Startups

And I have a piece on NFT Marketing currently under consideration.

So I’m thinking a monthly funding edition and a monthly marketing edition rounding up news plus a deep dive or two might be just the trick!

What do you think?

Let me know what NFT Business News you’d like to see through the NFT Entrepreneur contact form.

This edition of the NFT Entrepreneur Newsletter focuses on funding news and leads with the news most relevant outlets are leading with, OpenSea’s $23 million raise led by Andreesen Horowitz. Hey, maybe now they can afford a real artist validation program!

In addition to startup funding news, this edition also includes raises by investment funds investing in NFT startups or NFTs as assets.

For now, we continue to focus on digital art and media NFTs and include companies that may only be partially focused on such NFTs.

“To help make this vision a reality, we’re excited to announce our $23M fundraise, with an incredible set of partners to support us on this journey. Andreessen Horowitz brings deep knowledge in crypto and unparalleled passion and devotion to the emerging web3 ecosystem. Innovative angel investors and leaders such as Naval Ravikant, Mark Cuban, Tim Ferris, Belinda Johnson, Ben Silbermann, Alexis Ohanian, and Balaji Srinivasan; crypto natives Standard Crypto, Linda Xie, Avichal Garg, and Flamingo DAO; creators like 3LAU, RAC, and Justin Kan; and NFT thought leaders like Andrew Steinwold, Metapurse, and Bill Lee are all partnering with us on this journey.”

“Our existing investors, including 1Confirmation, Pascal Capital, Blockchain Capital, Regan Bozman, Kevin Hartz and Dylan Field from Figma, continue to provide their support through their participation in this round. A huge thank you to a fantastic group of investors.”

“Aside from phenomenal growth, the founders are what can only be described as all-star. CEO Devin Finzer was a growth engineer at Pinterest, sold his previous company to Credit Karma, and studied computer science at Brown (fun fact, he started a college business with a16z-backed Figma founder Dylan Field). His co-founder, CTO Alex Atallah, previously built cybersecurity products at Palantir, after studying computer science at Stanford and selling a music streaming company to Beatport. ”

Previously from Andreesen Horowitz aka a16:

a16z showed increased interest in NFTs in 2020 under the umbrella of “New Ways for Creators to Monetize” as shared in their Crypto Investment Thesis.

A variety of NFT-related projects are participating in Gitcoin Grants Round 9.

While I won’t be sharing the outcome of all the grants, I’d like to point out that CryptoArtNet is participating. For those not familiar with my background, I founded CryptoArtNet in May 2020.

“DAOSquare Has Completed Seed Round Funding”

“DAOSquare has completed its first round of funding, at a valuation of 15 million USD.”

“Born in the well-known Ethereum community @Meta_Cartel, DAOSquare is dedicated to constructing a Web3 Y·Combinator-style incubator in the Web3 era.”

“In April, DAOSquare will launch the core components of the incubator: an incubation system based on the core DAO concept, and launch the first phase of its global incubation plan.”

“Zora, the company behind an Ethereum-based marketplace for tokenized product [aka NFT] drops, has received an investment from Paradigm.”

“Fred Ehrsam, the co-founder of the crypto VC firm, announced the news on Twitter Thursday evening. The terms of the deal were not disclosed.”

“In a blog post, Ehrsam effectively positioned Paradigm’s stake as a bet on the future of non-fungible tokens or NFTs.”

“Illuvium has raised $5 million to build a platform that combines non-fungible tokens, or NFTs, with a fantasy battle game.”

“Illuvium is planning to create a decentralized autonomous organization, or DAO, which allows the community to gain ownership of the project and, in turn, engender a financially self-sustainable gaming platform. Revenue is generated from in-game fees collected and purchases of Illuvials on the IlluviDEX exchange.”

“Curio, the preferred platform for brands and content owners to create digital fan experiences and collectibles, announced the closing of $1.2 million in an oversubscribed seed round led by Future Perfect Ventures, with participation from A195 Capital, LongHash Ventures, Moonwhale Ventures, and several others including media veteran Rich Battista, former CEO of Time Inc and former Fox Entertainment executive.”

“Funding comes on the heels of Curio’s collaboration with Fremantle, who utilized the company’s platform to create digital collectibles for fans of the hit show, American Gods.”

“As a part of the investment, Curio will accelerate its integration with Filecoin and Polygon (formerly Matic) to enhance the functionality of the platform for entertainment brands interested in creating non-fungible tokens (NFTs).”

“Mark Cuban…has invested in Mintable & we are now proud to be one of the Mark Cuban Companies!”

The CEO of Mark Cuban-backed Mintable on the bull-case for NFTs, founding the business and how the market could evolve
CNBC Make It (3/19/21)

“In 2018, [Zach] Burks founded Mintable, a platform where users can mint (or blockchain verify), buy and sell NFTs.”

“In March, Mintable announced it landed an investment from Cuban, who has used the platform to sell NFTs himself. Blockchain accelerators LongHash Ventures and ZILHive have also [previously] invested in Mintable, according to PitchBook.”

Playcent raises $1M from industry heavyweights to build a UGC platform for dapps, games and NFTs
Playcent on Medium (2/27/21)

“We’re excited to share the news that we’ve raised a $50 million Series A funding…This round was led by Benchmark with participation from Accel and additional investment from a team of world-class investors including Antoine Griezmann, Rio Ferdinand, Oliver Bierhoff, Alexis Ohanian and Gary Vaynerchuck.”

“In May 2019, Sorare raised just over $500,000 in a pre-seed round that included Ethereum development house ConsenSys. Last July, it followed that up with a $4 million seed round led by e.ventures which was later extended to $10 million.”

“We are pleased to announce that Ethernity has completed its strategic investment round, planting the seeds for the NFT ecosystem we’re building.”

“We’re grateful to Black Edge Capital, Morningstar Ventures, Spark Digital Capital, Woodstock, and Genesis Block Ventures for their support and we’re excited to have them with us on this journey.”

“Ethernity Chain is a community-oriented platform that produces limited edition authenticated NFTs by your favorite artists and endorsed by those who you admire.”

Ethernity Chain: What to Know About ERN Coin and the New Muhammad Ali NFT
InvestorPlace (3/9/21)

“Ethernity conducted an IDO for its utility token ERN coin via Polkastarter.”

“The round was led by Argo Blockchain Plc, who will be maintaining their c.25% stake with an investment of approx. $10 million (approx £7.1 million).”

“Other investors including two other publicly traded companies, Pires Investments Plc and Riverfort Global Opportunities Plc also participated in the round. The company has surpassed $50 million (approx £35.9 million) total assets under management within just 50 days of being established.”

“Pluto Digital Assets, the decentralised technology investor, has raised $40 million in a recent funding round and will spend part of this on building a private NFT collection.”

“Pluto is already accumulating NFT assets and has said that it will publicise its collection in the near future.”

“The time has come to make money from playing games, according to Yield Guild Games, which has raised $1.325 million to enable this to happen.”

“Yield Guild Games is a pool of 2,500 people [with a DAO in the works] who believe in the “play-to-earn” model that rewards gamers for playing games…It takes the money from investors and earned by players and reinvests it in game assets and virtual land.”

“Dizon has been watching the trend in NFTs for a few years. So he dreamed up the DAO for Yield Guild Games and raised the money last fall [though only recently announced] from Delphi Digital, Scalar Capital, BlockTower Capital, Gumi Cryptos Capital, Ascensive Assets, and Youbi Capital, among others. Scalar Capital is a crypto investment firm founded in 2017 by Linda Xie and Jordan Clifford. Its investors include Chris Dixon, Marc Andreessen, Elad Gil, Brian Armstrong, Fred Ehrsam, and Bain Capital Ventures.”

“FD7 Ventures today announced the opening of their Bangalore office. The new location is home to an FD7 micro-fund targeting $250 million USD that will focus on investments in teams building out projects that further the Polkadot (DOT) and Cardano (ADA) ecosystems.”

“FD7’s new fund aims to make investments of approximately $1-5M across 50 companies yearly, with roughly thirty percent of those Polkadot and Cardano ecosystem-based companies receiving secondary investments of $5-20M, depending on their growth metrics.”

“In addition, FD7 partners noted that the company is bullish on NFT projects and will seek investment opportunities to bolster their DOT and ADA-related project holdings in this niche.”

“‘FD7 is excited to have plans underway to work with Bollywood celebrities and star Cricket players on NFT projects in the near future. These are dear friends of mine who also happen to be LP’s in our fund’ says [Global Managing Director Prakash] Chand.”