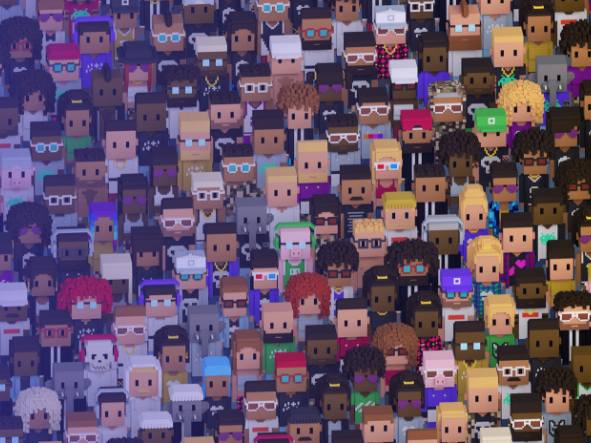 “Say hello to The Meebits“

My latest for The Defiant dives into the perceived value of Meebits NFT collectibles by avid collectors versus the impression of some crypto artists that a bubble is building in NFT collectibles due to Degen trading tactics:
Meebits’ $1.4M Sale Has Crypto Artists Calling Bubble

What I didn’t explore in that piece as deeply as I wanted was the Degen trading tactics piece of the puzzle.

CoinGecko defines Degen trading as “when a trader does trading without due diligence and research, aping into signals and FOMO into pumps…Essentially, a degen trader buys into an asset not because they see value, rather they do so with the belief that others will join in after them and speculate on the price swings.”

There are other elements associated with Degen trading but the above aspect is what I’m thinking about which drove a lot of the trading during Defi summer in 2020 for various crypto assets. During the recent NFT boom which involved both NFT collectibles and crypto art, we saw such patterns around celebrity NFTs, particularly on Nifty Gateway, and on NBA Top Shot. However, because there was a bit of a frenzy happening and celebs and NBA Top Shot seem like good choices in many way, I didn’t think about it in Degen trading terms.

But, looking back, that was definitely part of the picture. Though Nifty Gateway and crypto art in general have cooled a bit and music celeb NFTs aren’t doing so well in the secondary market, NFT collectibles are hot.

As I noted for The Defiant:
“Recent releases of NFT collectibles that caught fire include the rediscovered MoonCats, with a trading volume of over $9 million in the first seven days, the Bored Ape Yacht Club, which did $7.3 million in volume in its first week, and Hashmasks, which sold around $10 million in four days. Each release was characterized by a great deal of anticipation indicated by social media chatter, a fast initial sale and heated secondary sales.”

And, most recently, Meebits:
“In less than a week, Meebits is the 8th most successful NFT project of all time based on secondary sales volume, according to DappRadar.”

As ROBNESS stated in quotes that didn’t make it into the piece (yes, he writes in all caps and these are from my DMs so I’m keeping them):
“THE MODEL OF ‘I MADE X AMOUNT OF THESE IN ONE SWOOP………NOW BUY IT OUT/COLLECT IT,’ HAS GOTTEN TO A FEVER PITCH.”
“A GAMIFICATION ELEMENT HAS DEVELOPED AND YOU HAVE A WHOLE NEW FORM OF DEGEN TRADING, IT’S JUST THOSE GUYS HAVE NO IDEA THEY’RE ACTUALLY IN IT NOW.”

Sillytuna followed up after reading the piece:
“The degen thing is funny because where did they think all the nft money came from in the first place?! Anyone having 2 eth to spend is playing the game and knows the risks.”

True but not true. NFT and crypto art trading always had elements of crypto trading and many collectors turned accumulated crypto into NFTs. But the overheated dynamics of Degen trading mainly appeared at the high end of the art market for established artists and for NFT collectibles after a longer build-up. The sell-out in less than a day and the 7 figure prices for a growing range of assets is very 2021.

It’s an interesting dynamic, as much qualitative as quantitative, and a topic to which I will return.